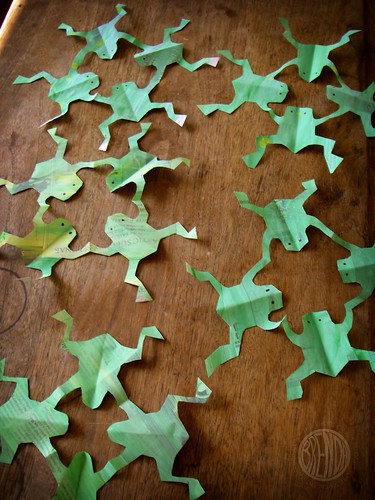 To those of you who celebrate this happy holiday, we wish you a happy Passover.

This holiday project was borrowed from the parenting website www.alphamom.com.

If you celebrate Passover, then you probably already know all about those frogs. As the story is told in the book of Exodus, frogs were the second plague that God sent to change Pharaoh’s mind about keeping the Jews in slavery. Unfortunately an infestation of frogs did not change his mind and nine other horrible plagues were needed before the Jews were allowed to go free.

While the story of Passover is no light matter, I think it’s safe to have a little fun with frogs to help us remember the second plague. I wouldn’t want my house to be infested with frogs but they sure are fun to make out of paper! (Fig 1)

Step 1. Make “frog skin” by painting with cheap kids’ acrylic paint (water-based is safest) on top of newsprint. Big sloppy strokes are fine especially if you want your frogs to have texture. (Fig 2)

Step 2. Add some warts by stamping a pencil eraser and wine-bottle cork into yellow paint. (Fig 3)

Step 3. When the paint is dry, cut the (now somewhat-stiff) painted newspaper into big squares. You don’t have to measure — these squares are roughly 7 inches, though some were bigger and some smaller. (Fig 4) 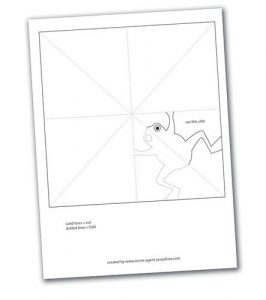 Step 4. Folded square in half and then in half again (like you would fold it to make a snowflake) but instead of cutting snowflake shapes out of my square, cut out half a frog. If you don’t feel confident in your frog-cutting skills, have no fear! Here is a template that pretty easy to follow. Just be careful to cut the top smaller arm all the way off the edge. If you don’t, then you won’t end up with frogs that are holding hands. You’ll have a bunch of separated frogs.. but that’s fine too. (Fig 5 & Fig 6)

Step 5. When you unfold your paper, there’s your frog snowflake. You can draw eyes with a crayon or marker pen or even add googlie eyes. (Fig 7)

Stay in touch and share where your imagination has taken you by posting your project photos on Facebook or Instagram with the tag #HVArtsDailyDose or email a photo to us at info@hvartscouncil.org!